Absolute Construction > Blog > Roofing > We are the roofing professionals you’ll need, after the storm 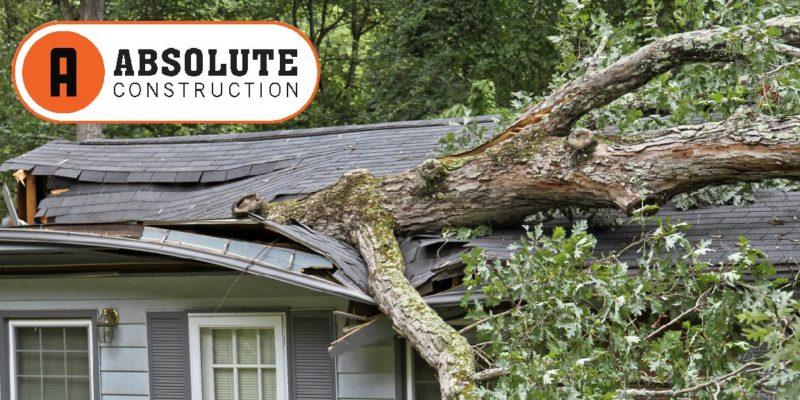 Whether you believe in global warming or not, there has been some major change in weather patterns all over the United States, especially in the last couple of years. Ranging from major snowstorms in places where there hasn’t been one in a decade or more to relentless hailstorms in the southern states.

Hailstorms are more common in The Great Plains and the Midwest states. The meeting point of Nebraska, Wyoming, and Colorado is called the Hail Alley. Cheyenne in Wyoming receives up to 10 hailstorms a year.

In the last couple of years, Texas has been on the receiving end of non-stop hail storms. Insurance companies reported of $1.4 billion loss to property, in the April 2016 hailstorm that hit San Antonio area.

What is a hailstorm?

Hail starts forming from water droplets that freeze as they rise and experience drop in temperature. The water droplets get caught in a tumbling pattern of the wind due to the considerable upward draft formed during thunderstorm clouds. A consistent upward draft is a prerequisite for hail formation.

Hailstones aren’t blocks of ice like sleet, but a cluster that is formed by layers. A cross-section of a large hailstone shows an onion like formation. The layers could be of transparent ice or may be formed with alternate layers of transparent and translucent ice. They could be in the shape of balls or could be in any other clumpy shape.

According to the US National Weather Service, a severe thunderstorm warning is issued when the size of the hail is expected to be 1 inch or more in diameter. These have the ability to severely damage life and property.

What kind of damage can a hailstorm cause?

The most common damages that a hailstorm causes are damaged roofs, holes in the windshields of cars and broken sunroofs, erosion of sealant on the roof and so on. It could also ruin your landscaping and leave your precious yard a mess.

During the hailstorm trees in your surroundings could get uprooted. This can cause catastrophic damage if the tree lands on your property or vehicle.

An uprooted tree landing on your house could mean serious damage to the roof and also your belongings. In such an event you and your family members should evacuate the house immediately.

Once the storm has passed, and the debris has been removed contact a trusted roof repair company to assess the damage. It’s not wise to postpone an assessment of the roof because you have no idea what kind of damage has been done.

A small leak or exposed area on the roof should be fixed quickly before it starts damaging the structure of your roof. A roofing contract can also help you with a temporary fix so that your house is not exposed to the elements, and you can clean up the insides of your home before taking up major repair work.

Common residential roof damages you should not ignore.

Missing shingles: Once a storm has passed, you might notice parts of your roof look darker than the surrounding area. If you are able to take a closer look, you’ll notice that shingles in these dark areas are missing. The dark color is the black asphalt layer that protects your roof from becoming weak and leaking, that’s now left exposed.

The top lighter colored layer is made of mineral granules that shelter the lower asphalt layer from the harsh rays of the sun and protect it from rainwater. When hailstones or fallen tree branches damages them and they fall off, it exposes the black asphalt layer.

In most cases of even a single missing shingle could lead to leakage in the roof down the line. Water could easily make its ways between the lower shingles and expose the lower layer during rains.

Missing shingles, however few should be replaced immediately. Get in touch with a professional roofer who deals with residential repair. A trustworthy roofing company should be able to replace the shingles for a reasonable cost.

Broken Sunroof: Skylight or sunroofs increase the natural light that enters your house. Apart from keeping your home warm and cozy, it also enhances the value of your house. But if your house is in an area that’s prone to hailstorms, the sunroof can easily get damaged.  Being proactive and covering them up when you hear of an imminent storm warning helps, but it’s not always practical.

In case your sunroof is damaged, you should think of replacing it with an acrylic or polycarbonate material that’s much more resilient than glass. You could increase the durability of a glass sunroof with a protective layer or a double pane glass. Talk to a professional roofer to know what options would suit you best.

What to do if you’ve been hit by hail?

It’s always a good idea to ask a trusted roofing company to assess the damage if your home has just survived a storm. We have been restoring roofs and keeping families in Texas dry and safe for over a decade. Contact us to schedule your FREE roof inspection today.